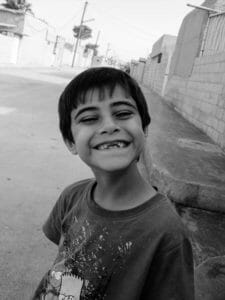 Ouch! The tea I just poured for myself in my Turkish tea glass burns my tongue! I love these tea glasses but honestly, it takes too long for them to cool down enough for me to be able to start drinking. Now you are probably wondering why I love them if they burn me every time I pour to drink. Well, that is because they remind me of my time in Turkey.

I used to live in Istanbul with my family, my parents and my two older sisters, as a transit period before moving to Germany. Even though it was hard to leave our relatives and life in Afghanistan, my parents said it was to give us a safe future, especially for my sisters. Honestly, we are grateful every day for what they gave us.

Now, back to why I loved my time in Turkey. In spite of the heartbreak of leaving home, my dad made sure we enjoyed our time in Istanbul. Almost every day he would take us by the Bosphorus for a long walk to the parks that all had playgrounds. Every night he would tell us stories of hopes and dreams till we fell asleep. And of course, the traditional teacups that are served everywhere in Istanbul are my best souvenir from our days there.

Oh, by the way, this is me in the picture. It was taken in Kabul when I was seven years old. That is the last picture my mom took before we left Afghanistan. I was really happy that day because my parents said that in one week we would get on a plane to fly over the clouds and that they were going to buy me my own Game Boy so I could play games as much as I wanted.

Of course, now as an adult of 26 years, I realize they were trying hard to keep me distracted from the war that was escalating in Afghanistan. The Taliban had already made life difficult for my mother and she was worried about my sisters. My family and relatives were the progressive thinkers of Afghanistan and as you can imagine, this did not fit well with the Taliban regime that had come into power in 1996. Therefore, my dad was smart enough to flee the country before things got any worse.

Today, when I hear about how Afghans have suffered the war, how girls were treated by not only the Taliban but also American soldiers, I am grateful that my sisters never got to experience any of that. It hurts me whenever I hear how Afghan refugees are treated and with how much difficulty they have to flee the country and even get deported once they arrive in Germany. That is why even though I am a mechanical engineer, I volunteer at the refugee camps on the weekend.

We arrived in Berlin on a nice sunny day, the sky was full of huge white clouds and I was spotting funny figures together with my sisters all the way to our new house. “Look, a dog. There, a tree. Over there, a donkey!”, you could hear every time we were in a car together. We used to do that often in our beloved Kabul as well.

My parents were really happy because we could finally start our new lives, far away from the fear and hunger that war brings. Berlin was the perfect city for our family. Full of people from all different nationalities and backgrounds. It was also a city with freedom. We were finally free to say what we thought and felt. I was still a kid but the only thing I really wanted was to feel free and not to be scared anymore.

My father was an artist and had a heart of gold, he would do anything for us. He would not let us be sad even in the scariest moments of our lives.  My mother is the most beautiful and strong woman I have ever met. She was a passionate teacher in our hometown but unfortunately, she could not teach anymore. I always felt sad about that, but she was our teacher at home. She learned German in one year. She is so smart, just like my sisters who were always the best students at school. The teachers would always say that we had a bright future ahead of us. We were pleased to hear that because due to our origins, we had to challenge ourselves twice as much as the other students.

Berlin was a dream city to live in but going to school there was difficult. Sometimes we had to struggle with racist comments, harassment and bullies. No matter what we did, no matter that we were good people, there were always people who wanted to hurt us with horrible words. As a kid you try not to think about it but sometimes it was just too hard to cope with. Luckily my parents gave me the strength I needed to survive during the hard moments. They said to me: “We survived a war, so we could survive anything else in this world. We are survivors!!!”  And I kept repeating those words in my head every time I needed to hear that.

One afternoon I saw my father crying for the very first time in my life, I couldn’t believe it. I was behind the door hearing the conversation between him and my mom.
“I will miss your smile habibi”, he said. The scariest feeling came to my body since we left Afghanistan. “Why is he leaving us?”, I asked myself.  Three months later he passed away due to lung cancer that was detected too late. Two months before my 18th birthday. The night before his passing he told me:  “Bashir, you are now the man of this family, you have to protect your mother and sisters, be always kind and respectful and no matter what, always fight for your dreams.” I miss his stories and our long walks together with my sisters.

The echo of my father’s will became an obsessive mantra that did not leave my ears. The responsibility he gave me when he left, seemed to be enormous. In our society a father is as a nucleus, always surrounded by the rest of the familiy. The confrontation with this responsibility and the pressure to achieve the aspiration and dreams of the family was high.

Our small village in Afghanistan sleeps in the bosom of the valley and the valley people are said to be dreamers by nature while they cling to life. We have already survived decades of civil war and natural disasters caused by the floods of rivers that depleted our homes built of mud and bricks. The best period of our lives is when the snow melts and enable us to grow wheat on the slopes of the mountains. For us, our village was the border of our world.  I can hardly forget that day when my father decided to lead our family into the unknown, to this land of misery and dreams that never come true.

After a long journey in old trucks accompanied by dirty gangs smuggling people, we crossed the border of Turkey. We arrived after two months in Greece and so many other countries. I knew Germany was our destination by hearing my father whispering to the smugglers and paying them in a secret way. After six months on a horrible journey, we found ourselves in a city called Berlin, the capital of Germany. We settled in a refugee camp where my father passed away due to lung cancer. It was the night before he gave me the responsibility to take care of our family and encouraged me to chase my dreams.

My family and I applied separately to the authorities of immigration for obtaining legal residency. For that reason, I wasn’t able to achieve my father’s will and the responsibility he left for me. My request for residency in Germany was rejected three times,  life narrowed in my eyes and my family started losing hope. Many of my friends told me that the only way to get legal papers for residency, was by marrying a girl who has got a citizenship. Every day this idea became more and more my life jacket through which I could pass all my difficulties.

One day I decided to visit some friends in a small city not far from Berlin. It was only nine o’clock and cold outside. I pushed myself in a crowded train cabin. I found a seat by the window where I was facing an old lady and a beautiful blond girl. The girl gazed at me and I felt my heartbeat speeding up. The trains started moving and I pushed my foot gently touching the girl’s barefoot. I felt a warmth overwhelming me when she didn’t turn her foot  away while she was gazing through the window. I started daydreaming  about the future.

I was in a relationship with the girl and married her. She paved the way for me to have legal papers and I had training in a technical institute. Later I found a job that helped me implementing my father’s will.

Suddenly the train stopped at a small station, the girl took her bag and left the train. I was still feeling her warmth but when I looked down I realized that the source of the warmth was from the foot of the old sleepy insensitive lady.

After the short visit to my friends, I came back to the camp and found a found a letter in the post asking me to go see the immigration authorities. They deported me to a closed camp to send me back to Afghanistan.

We all have superior ability to dream but a lack of planning.